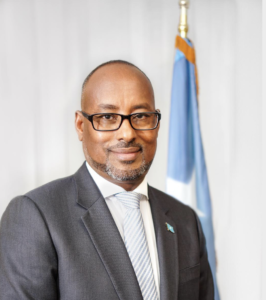 A Message from the Ambassador

It is an honor and privilege to welcome you to the Embassy of the Federal Republic of Somalia in Washington, D.C. As we work to develop a comprehensive partnership with the United States to deliver the voice and aspirations of the people of Somalia, I invite you to join us on our journey to rebuild a prosperous nation.

Our new government has implemented significant reforms to bring back peace after years of conflict, and our nation’s stability continues to strengthen with the support of the international community and the United States government.

Somalia is resilient and its people’s commitment to rebuilding their homeland and preserving its territorial integrity is limitless. With great excitement, I invite you to partner with us on this journey of peace and prosperity.

H.E. Ali Sharif Ahmed was appointed Ambassador of the Federal Republic of Somalia to the United States of America in May 2019. He presented his credentials to President Donald J. Trump on September 16, 2019 and formally assumed duty as Ambassador Extraordinary and Plenipotentiary.

Prior to his diplomatic service, Ambassador Ahmed was the senior policy advisor to the Office of the President and Vice Chairman to the Secretary of Foreign Affairs. In this capacity, he was responsible for overall and policy and led peace building and reconciliation efforts on behalf of the government of Somalia.

In addition to his public sector experience, Ambassador Ahmed worked as a business executive, entrepreneur and consultant for firms with global operations. Ambassador Ahmed holds a master’s degree in Geopolitics and Grand Strategy from the University of Sussex and bachelor’s degree in Peace and Conflict Studies from London Metropolitan University.